Running with Bipolar: the first step is the boldest

Part 1: This might be a guide for some of you who have been recently diagnosed with bipolar disorder; who are now taking up running with this new/longstanding diagnosis; who are looking for guidance to get back into running again whilst also managing bipolar disorder.

Disclaimer: I don’t have all of the answers. Answers don’t come neatly packaged with a bow, they are messy droppings scattered on your life’s path, and if the stars align you will see them as pearls of wisdom, getting you through the tough times.

You’re mad. Are you crazy?

Just a couple of the benign comments I received when folk learnt about my rather long LEJOGLE run of (eventually) 1795 miles. It was no biggie (dealing with the commentary). I could tell that there was no malice behind these words, and my personal medical situation wasn’t really at the forefront of their choice of vernacular, they were distracted by an altogether grander and more unknown concept: ultra running aka running further than probably necessary to get a sweat on. I understood where they were coming from because, only twelve months previous, I would have been having similar twitchy eyebrow responses to anyone running more than the stated 26.2 miles that is permanently classed as long-distance running. That distance is hard enough, why on earth would anyone run another mile further?

Apparently it would only take a feeling of not being capable of achieving anything anymore to encourage me to find out for myself.

What is ultra running but a simply longer, slower version of your natural stride pattern; a problem-solving-exercise in rationing of food and water for greater efficiency of movement and energy; more time outdoors (hopefully in smog-free zones) to experience the elements as nature intended (i.e. for longer than 30 minutes per day); an emotional rollercoaster as well as a physical one; and a mental battle between yourself and your other self, that one that says no, that cries wolf, that tells you to give up.

All runs start with the first step.

OK, so I’m getting ahead of myself. I didn’t take up running because I was diagnosed with bipolar disorder, but my diagnosis did give me the impetus to turn to ultra-running distances as a bit of a ‘so-there’ to the world. Even so, when I started training I had to start back at square 1 (plus experience, which is never really square 1).

Getting out the door

Firstly, there’s getting out the door. It’s not uncommon to be suffering with high anxiety and depression at the same time, perhaps with sprinkles of paranoia and ‘mild’ hallucinations—such are some of the traits of bipolar disorder, and a rather complicated mixture to contend with. For each person, these symptoms will manifest in any which way, so don’t hold out for a prescribed textbook response to each, there isn’t one, but there is advice that you can adapt and bend to your needs, rather than adopt outright as gospel.

For me, it was a gradual immersion back into life outside my front door, plus inspiration from unexpected sources, that helped me to bridge the gap between can’t and cannot wait. The dark, empty feeling of despair for your life, your worth, your ability, your reason for existing takes an eternity to pass, but if there’s one key element to bipolar disorder it’s this: it will always pass.

Secondly, there’s timing. I don’t mean timing in relation to, let’s say, clashing with work schedules, medical appointments or your kids heading home from school. I mean timing where running has been offered as a therapeutic outlet as part of your wellbeing and recovery.

The thoughts about going for a run will come before you actually do it, sure. And with that either lots more anxiety or perhaps lots of frustration that you can’t just get out yet because of so many other factors that are invisible to the outside world. So, if the message out there is that you have to run NOW because otherwise if you don’t you won’t get better, then you may find yourself starting off your run with quite a lot of resentment to the pressure. Perhaps a friend, your family, your doctor have all said that running will be great for your bipolar episodes, but only you will know when the time is right to get going (again).

Thirdly, there’s choosing your route. Now, I will be completely and utterly honest with you, I believe running and walking are some of our greatest gifts for survival. Travelling our planet on foot is inherent in our DNA, our ancestors will have travelled when they migrated from wherever to wherever else, using nature’s own incredible, sustainable fuel: food.

That said, as humans we appear to be moving away from admitting how the surface we run on impacts our mobile life.

The majority of us have a pavement outside our front door, and we pound the pavements relentlessly: that dark, grey, pretty smooth—though in many places completely botched-up, manhole-sized potholes—surface isn’t natural. It isn’t natural for our physiology to only experience tarmac.

OK, so you might hate me already for unapologetically implying that tarmac is appalling for your body, but it’s all you’ve got and it’s one step at a time. So let’s look instead at where you plan to run, and some of the factors that might just be creeping up on you, (perhaps others could be added to this list?):

Do you have an answer for any of the above?—if not, keep it simple. You’ll figure out what environmental fulfilments you’ll need for your recovery with every step and every outing that you manage. You’ll adapt to your preferences. Go out and do one run at a time.

Doh, so much to think of. Hopefully this won’t come across as an experiment in processing rapid thoughts or managing the classic trait of multi-tasking without making progress, it’s simply that the world of running is alive with options, consequences, choices, alternatives. Going forward, let’s try and narrow these down a little and start with asking: what are my route choices?

Equally useful and informative, here are a list of other bloggers, writers, runners who share tips on running, mental health and keeping your shizzle together somehow:

If you’d like to understand more about this condition, please visit the charities dedicated to increasing awareness. Some examples are:

If you enjoy Yvie’s creations, do consider becoming a sponsor on Patreon.

At Patreon you can support Yvie’s work from the price of a few stamps each month, with incentives of rewards, from being involved in the design process to receiving personalised kit from the collection.

All of the patreon funds directly support Yvie in carrying out her creative work, which is also her own therapy to fight the isolation and stigma of bipolar disorder & ME (CFS). Thank you so much.

Something you’re looking for?

Something to write home about. 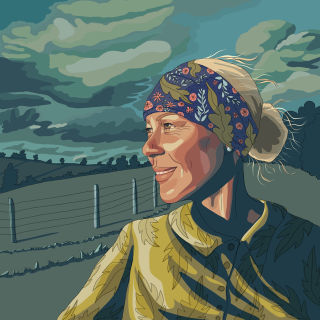 "You are the root of your success." Turbulent times will bring out the best in you, to make you stronger for yourself, and for others. Living with Bipolar Disorder, I'm now taking one day at a time and arming my spirit and body with health, love and happiness for the journey ahead.